I don’t remember meeting Bram. I don’t remember an official time that Bram became a part of us as a family. He just started out being “around” just like anyone else at my mom’s college. Since I was there when she was there, everyone was just around. Mom’s college friends were kind of my college friends. The word friend might be misleading, I suppose. They were theater folks. The perfect group of people to be a weird little kid around. They sang, they danced, they improv’d, they created, they dressed up, they sword fought. Basically, it was all fun.

One time, Bram came into the costume shop, looking like the weirdo that he was. In my mind, he was as good of a victim as anyone. So I turned to him and I said, “I can do the splits.” He said, “Yeah? So can I.” I looked him up and down, extremely skeptical of his body’s abilities. This guy? He’s chubby and wearing combat boots. So I plopped down into the splits right in front of him to shut him up. Take that!

And then he plopped down into the splits too.

There have been few moments in my life that I have been absolutely silenced. I always have a comeback! But frankly, there was no coming back from that. This dude just murdered my little soul.

Then he got up from the splits and left. Like he had no other intention of entering the room other than to school an 8-year-old.

A Lesson in Step-parenting

Eventually, Bram did officially become a legit part of the family. For me it was such a slow progression to “official” that it didn’t really register to me that he would be my “stepdad”. He just became a fact.

To anyone that met Bram through me though, he was my dad. It was just easier that way. My biological father was no longer in my life so there was no chance of meeting him. And once people got to know me more, they found out that Bram was my stepfather, sure. So if teachers or schoolmates met him, he was just my dad. I never called him “Dad”. He was always Bram. If someone got nosy about our relationship, I just said he was my Bram. Father or Stepfather titles didn’t really work for me. Mostly because previous men who played those roles were pretty shitty.

When my mom married Dan, he forced me and Nick to call him “Daddy”. That left a bad taste in my mouth. It wasn’t my choice. My mom didn’t know that it was forced upon us until he was gone. She also didn’t know he spanked us a couple of times too. You know, just like a good stepparent sets up a positive foundation for a good relationship: physical abuse and being overly familial.

But Bram…he was a good stepparent. He never told us what to do. He never laid down the law. He never made rules for us. That’s not to say that he would just let anything happen. He just knew it wasn’t his place. So if Nick and I were getting out of line, his go-to tactic was to say “Michelle wouldn’t like that” or “You know I can’t hide that from your mom, right?” It really was the perfect way to avoid the “you’re not my real dad” argument. Of course, when it came to just being respectful of him as a person or his belongings, he had every right to enforce those boundaries around himself, which he did. But he never bossed around us kids. He very carefully tread that line of a caring, safe adult for us, but not overstepping.

He was still my dad though. He would buy my school clothes. He helped me with my math homework. He created the dance mixes for my dance team. He would get my tampons when I put it on the grocery list (cleverly I disguised it as “stuff stuff” so as not to be embarrassed by my 7th-grade needs – he knew what I meant). He agreed to pay my car insurance for the first couple of months of driving. He taught me how to parallel park (despite Joyce insisting on helping me and confusing the crap out of me). He made me feel good about my likes; he validated my love of Gilmore Girls (he thought Emily was a hoot). 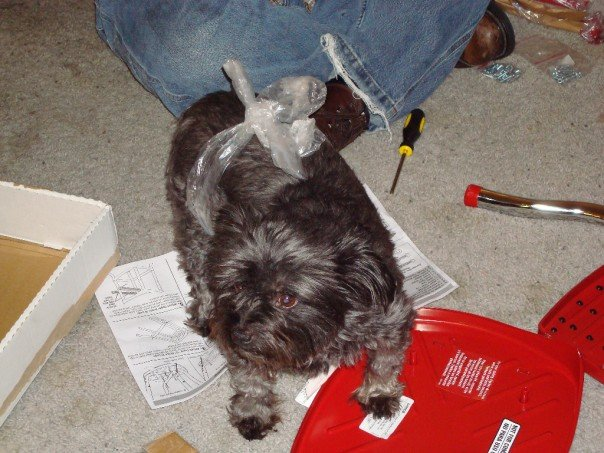 Bram putting an impromptu bow on my doggy.

Man, he was so pissed when I brought a dog home. That was probably the closest I saw to him laying down a parental rule. Luckily, as my mom mentioned, all creatures are worthy of love and there was no way the dog was getting the boot, despite himself.

I think a side-effect of not being “the parent” to us meant that he had to cope in different ways. He developed a “snooty face” as I called it. He’d start to get annoyed and this look would develop, a signal that he was getting pissed. He’d never let himself explode or yell, but you could just see, we were getting to him. Eventually, I started calling it out. “Oop, Bram’s getting a snooty face. Oooooooh!” He would immediately deny having such a thing, a clear LIE, and the tension would disappear. He would also find ways to annoy us back. One thing I COULD NOT stand was his choice of language. If you know this family, you know we don’t give a shit about cursing. Say “fuck” all the livelong day and we won’t bat an eye. But Bram knew what to say to get me riled: butt puckering. A lot of things could make his “butt pucker”. And he always brought it up when he felt due to annoying me. “These chips are spicy. Makes my butt pucker.” Shut up! Stop saying that. Of course, Nick hearing how much that phrase pissed me off, would join in and up the ante. Then they would bond together finding a reason to say their butts were puckering. Just typing this over and over again is giving me goosebumps. I hated it!

As I said before, Bram validated my likes. I loved the singer Jewel. He liked her too. We would belt out Jewel songs as a family. No shame at all. But he didn’t like her song “Hands”. He thought the lyrics were dumb. If you can’t remember, here’s a link to the song. The chorus goes

My hands are small, I know

But they’re not yours, they are my own

But they’re not yours, they are my own

And I am never broken

Did I stop singing that song because he hated it? No. Of course not. I would sing it at the top of my lungs.

Perhaps it was one of these stupid little ways of annoying each other that ignited an incident that always makes me laugh when I remember it. Maybe it was the fact that he always gave dry-willies when I was concentrating on something. (That’s when you just stick your finger in someone’s ear, but it’s not as gross as a wet-willy because you don’t lick your finger first. So I appreciated the dry-willy more than the wet one.) Sometimes I was just a 14-year-old girl who thought parents were…like, the worst.

Bram and I were annoying one another. Egging each other on. It started escalating. It was escalating beyond words, beyond dry-willies. I don’t even remember how it got to this point, but we started poking each other. Then tickling. Then pinching. Yelling at each other. To the point where we were running around the living room. Our living room was small and packed with furniture and books. So this meant crawling on the couch or jumping over chairs. The animals were all fired up and freaked out. Mom and Nick trying to stay out of our way simultaneously amused and worried to become victims themselves.

Finally, I gunned down the long hallway, screaming the whole way as he chased me. I made it to the bathroom, the only room in the house with a lock on it. I bolted in there and turned around to slam the door. But he was right there. Before I could close the door he grabbed my hands, locking his grasp so I couldn’t escape.

Immediately, I stopped screaming and looked at my hands. Then I looked him dead in the eyes, and with the most seriousness that I could muster in this chaos, I said, “My hands…are small…I know, but they’re not yours” we couldn’t keep our faces serious anymore. We both burst out laughing, first loud laughs that turned into silent gasps for breath. We were in hysterical tears by the time I got through the last words, “they’re not yours, they are my own”.

After that, hearing Jewel’s song Hands on the radio randomly was immediately met with us looking at each other seriously, holding up our hands together and saying those words, then busting up laughing all over again.

It’s been 20 years and I still tell that story when I hear that song.